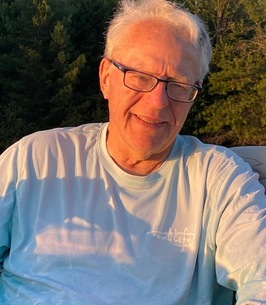 William Ray Roeder Barten, age 78, passed away at MCHS Chippewa Valley on Sunday, June 12, 2022 surrounded by his loving family. He was born in East Chicago Indiana on October 27, 1943 to George W. Roeder and Rosalie Lamb. After Bill graduated from Brooke Indiana High School in 1963 he joined the US Marine Corps and was stationed at Camp Pendleton in San Diego. He served in the Headquarters Battalion Military Unit, First Marine Division and was a Vietnam vet. After returning to the states, he received an associate degree in electronics and worked at Hughes Aircraft. Bill used his outgoing personality to become an electronics salesman, becoming co-owner of AMASCO, running the Southern California office.

Bill married Joyce Gilberts on July 1, 1989. In 2000, Bill retired and they moved to their lake home. He purchased a black lab puppy and soon became a dog trainer. Bill and his brother-in-law, Lynn, started Hay Creek Game Farm. Bill loved spending time with his family and friends. He enjoyed the outdoors and was an avid hunter and fisherman. He was a kind, giving, gentle soul who loved, God, family and country.

He was preceded in death by his parents, George and Rosalie; first wife, Lynda and her parents Bud and Helen Berry; Joyce’s parents: Ray and Ardith Gilberts

Funeral services will be on June 24, 2022 at New Hope Lutheran Church in Sand Creek at 1:00 PM with visitation one hour prior to the service at the church. Burial will be in Our Savior’s Cemetery with military honors by Bloomer American Legion/VFW/AMVETS. Olson Funeral Home in Bloomer is assisting the family. Online condolences may be expressed at olsonfunerealhomebloomer.com

Please direct memorials to New Hope Lutheran Church or the Tunnel and Towers Foundation. Services will be livestreamed on the New Hope Website: newhopescpc.org

To order memorial trees or send flowers to the family in memory of William Ray Barten, please visit our flower store.