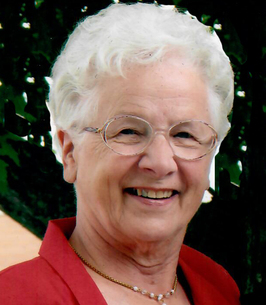 Ruth Boese passed away on Saturday, April 23, 2022 with her children by her side. Ruth was born on September 12, 1931 to Harry and Lorene (Pank) Ludwigson in Alma, WI, Buffalo County. The family later moved to Eau Claire where her dad worked at Presto. They then moved to Cooks Valley where she attended school until 4th grade and then moved to Keystone, where she finished grade school and started high school in Cornell. She was confirmed at St. John's Lutheran Church in Cornell. They moved to Bloomer when she was a sophomore and graduated from Bloomer High School.
On September 16, 1950, she married Harold Boese and they lived on a farm near Bloomer until 1969 when they moved to Bloomer.
In 1964 she began working at the Bloomer Hospital in the Dietary Department. In 1968-69 she took a course through the Vocational School for Dietary Manager and was the Dietary Department head until she retired in 1996. In 1998 she began working at Main Street Pie Shop and retired from there in October 2004.
Ruth was very active in her Dietary Managers Association, helping to get District IV organized and became President of the District. Then she became involved in the State organization and was elected to serve as its President two times. She also served on various State Committees. In 1980 she was elected National Regional Director of five states and then in 1983 she was elected the National President of the Dietary Managers Association, which at that time had 13,000 members. She was awarded the Doctorate of Food Services from NAFEM while serving as National President.
Ruth and her husband loved to travel and visited all fifty states plus traveled to Europe numerous times. They loved the annual trips to Door County with their children during cherry picking time. They enjoyed all the family outings that were held throughout the years.
Ruth taught Sunday school and was a 4-H Leader when her children were young.
Ruth enjoyed cooking and baking and enjoyed having pails of cookies for her grandchildren when they visited. She always had a big garden and did lots of canning. She also did lots of sewing, even making a wedding dress and many bridesmaid dresses. She also enjoyed her yard and beautiful flowers and waited for spring so she could plant more plants. During her later years, Ruth enjoyed volunteering at the Maplewood and Dove Healthcare. She was a member of St. Paul's Lutheran Church.
She is survived by her children, Gale (Byron) Boettcher of Bloomer, Wayne (Sherry) Boese of Nelson,
Karen (Donald) Schimmel of Bloomer and sisters Jean Meyer of Switzerland and Nancy Goller of Cornell;
Eight grandchildren: Gena (Ralph) Jarr, Ryan (Theresa) Boettcher, Tami (Nicholas) Pieper, Benjamin
(Angie) Boese, Alyssa (Will) Liebergen, Danielle (Paul) Henderson, Travis (Elesha) Schimmel, Kati (Brian)
Sedlacek; Twenty-five great grandchildren: Jordyn, Hailey, Rylie Jarr; Kayla, Bryan Boettcher; Brandon
(Kim) Cooper, Mitchell (Michaela) Cooper; Christopher, Abigale, Zachary, Hannah, Aaron Pieper; Joshua, Jonathon, Aurora Boese; Nora, Grace, Grant Liebergen; and Charlotte, Vivian, Violette Henderson; Kylee, Payton, Mason Sedlacek; Bentley Schimmel; one great great grandchild, Phoenix Cooper.
She was preceded in death by her husband, Harold Boese, her parents, Harry and Lorene (Pank) Ludwigson, stepmother Valborg Ludwigson, brothers LaVerne, Harold, Norbert, Harry Jr. and Patrick Ludwigson and sisters Joan Ludwigson and Doris Haase and sister-in-law Eileen Ludwigson.
Ruth was a very hard working, caring, compassionate and wise person and we learned a lot from her. What she loved the most was her family which always brought a smile to her face. Her family loved her very much and we will all truly miss her in our lives.
Funeral Services will be held on Saturday, April 30, 2022 at 1:00 PM at St. Paul Lutheran Church in Bloomer with a visitation from 10:30 – 1:00 at the church. Interment will be in the Bloomer Cemetery. Olson Funeral Home in Bloomer is assisting the family.

To order memorial trees or send flowers to the family in memory of Ruth Boese, please visit our flower store.