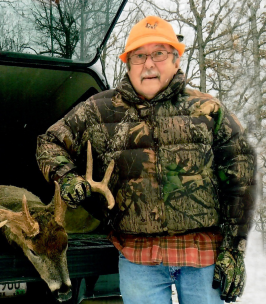 Joseph “Joe” C. Rada, age 78, passed away peacefully with his family by his side on Wednesday, October 19, 2022 at Mayo Hospital in Eau Claire. He was born April 28,1944 in the Town of Woodmohr to Cyril and Esther (Bauer) Rada.

Joe grew up in Bloomer, Wisconsin, attended St. Paul’s Catholic School and graduated from Bloomer High School in 1962. On November 19, 1963 he married Lucy Bowe at Notre Dame Church in Chippewa Falls. She preceded him in death in 1967. Joe married Diane Ruf at Holy Ghost Catholic Church in Chippewa Falls on August 3, 1968. They lived in Chippewa Falls and in Bloomer. Joe worked at Klinger Farms, Chippewa Shoe Company Bloomer Dairy and Leinenkugel’s Brewery for 20 years until he retired. He enjoyed deer hunting at his cabin in the Keystone area with his kids, grandkids and great-grandkids. He also liked fishing, camping in Gordon WI, playing cards and most of all, going to the casino. You knew Joe was in the room when you heard “What’s your point?” “How do ya like me now?”

Joe’s advice would be “Love is what gets us through it all. Just be a good person! Love, help and give what you can.”
To order memorial trees or send flowers to the family in memory of Joseph C. "Joe" Rada, please visit our flower store.