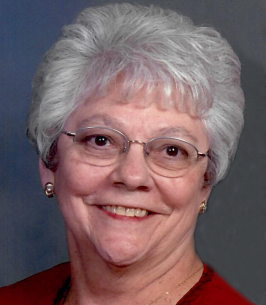 Ethel Bernadette (Sykora) Frogner, age 87, passed away on Saturday, May 14, 2022, at Colfax Health and Rehabilitation Center. She was born on July 16, 1934, in the town of Cooks Valley, Chippewa County, to James and Theresa (Fasbender) Sykora. She was the youngest of eight siblings. Ethel “Ecky” was raised on a farm. There she learned to be an exceptional cook and housekeeper. She attended school at St. John’s in Cooks Valley and Colfax High School.

On August 21, 1951, she married David C. Frogner in Cooks Valley. They spent two years farming, during which time their children Lee and Lynn (Berg) were born. They packed up and moved to Minnesota, where she helped David through dental school before moving back to Colfax. Together they ran a dental practice for 34 years, where she was the bookkeeper while doing anything else that was needed. She was the finest wife a man could ever have, while being a special mother, grandmother and great grandmother. Ecky was especially proud of the offspring and loved them dearly as they were so precious to her.

Many remember Ecky in her role as election commissioner for the village of Colfax or cheering on the Colfax Vikings basketball teams. She also enjoyed playing golf and cards, knitting, flirting to make everyone smile, and spending time at their cabin on Barber Lake in Winter. She was a devoted member of Colfax Lutheran Church. Her attendance, singing in the choir and quilting were testimony to that. More than anything else, she loved spoiling her grandkids and great grandkids with her attention and treats.

Funeral Services will be held at Colfax Lutheran Church on Monday, May 23, 2022 at 11:00 AM with a visitation one hour prior to services at the church. There will also be a visitation from 5:00-7:00 PM at the Olson Funeral Home in Bloomer on Sunday May 22, 2022. Interment will take place at the Evergreen cemetery in Colfax following the service.

To order memorial trees or send flowers to the family in memory of Ethel B. ""Ecky"" Frogner (Sykora), please visit our flower store.