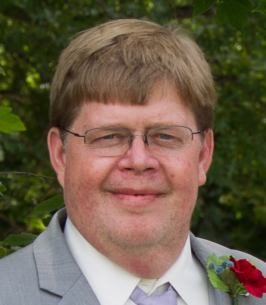 Douglas J. Westholm, age 58, passed away at Mayo Clinic in Eau Claire on April 13, 2022. He was born on November 27, 1963 in Sioux City, Iowa to James and Marilyn (Soderquist) Westholm. He married Rebecca Severson on January 26, 1991 in Albert City, Iowa. Doug was the manager of Cost Accounting for Jennie-O. Doug had many interests, including gardening, golfing, working jigsaw puzzles and anything to do with music. He would proudly tell you he marched in the Rose Bowl Parade with the University of Iowa marching band, playing the Bass Drum. He loved watching football and was a huge Minnesota Viking and University of Iowa Hawkeye fan. He was a very social person and enjoyed visiting with and entertaining his many friends. Above all he was a man of God and a loving, family man. He was proud of his children, never missing any event they participated in, and loving the time he could spend with his entire family.
He is survived by his mother: Marilyn of Albert City, Iowa; wife: Becky of Sand Creek; children: Derek (Jolene) Westholm of Colfax, Brandon (Allison) Westholm of McGregor, Iowa, Danielle Westholm of Sand Creek and Benjamin Westholm of Sand Creek; sister: Beth (Tim) Ingram of West Des Moines IA; brother: Dan (Jill) Westholm of Urbandale IA; numerous other relatives and many friends.
He was preceded in death by his father: James.
Funeral services will be held on Sunday, April 24, 2022 at 1:00 PM at New Hope Lutheran Church in Sand Creek. Burial will be at Our Savior’s Cemetery in Sand Creek. There will be a visitation from 4:00 – 7:00 on Saturday, April 23, 2022 at the Olson Funeral Home in Bloomer and one hour prior to services at the church on Sunday.

To order memorial trees or send flowers to the family in memory of Douglas J. Westholm, please visit our flower store.