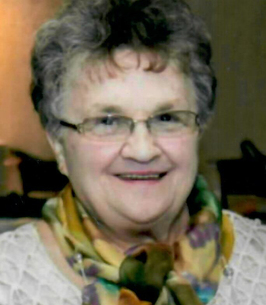 We have gained a guardian angel, as the Lord has called our beloved mother, grandmother, great-grandmother, and sister, Dorothy Ann (Bowe) Turner to her eternal resting place on February 16, 2022.
Born to George and Helen (Zwiefelhofer) Bowe on July 18, 1937 in Chippewa Falls, Dorothy grew up in a large Catholic family and was the youngest of 10 children. She attended St. Peter’s Catholic School in Tilden through 8th grade and then went on to graduate from Bloomer High School, where she met the love of her life, Bob. He quickly swept her off her feet, and they danced the nights away at the Pines Ballroom. Bob and Dorothy were married on July 9, 1957 and bought their first home shortly thereafter so they could start their family together. They raised 4 wonderful children together and spent time during her career working at Chippewa Shoe, Nelson Filter, and caring for her grandchildren. They had many furry-companions over the years that they loved; being kept company by her favorite dog Bud right up to the moment she found peace.
Dorothy loved spending time in the kitchen cooking and baking, and there was always a seat open at the table for anyone that wanted to join in for a meal. She enjoyed gardening, tending to her meticulous flower beds and growing a variety of vegetables every season that she shared with anyone that stopped by. She was a humble, but competitive card player and kept everyone at the edge of their seat when playing a game of rummy. She was so talented with a variety of hobbies….from sewing to knitting, crocheting to ceramics. She loved to make beautiful keepsakes for her family, a gift that so many will treasure for years to come as family heirlooms.
Dorothy was very proud of her children, and loved spending time with her grandchildren and great-children as families grew. They were the light of her life and brought her new-found joy as she was entertained by their jokes and games, endless hugs, and sweet kisses. “Grandma Dodo”, as her great-grandchildren referred to her, was loved by many and the happiest of memories will fill the hearts of all that knew her.
She selflessly cared for so many around her and found herself surrounded by her loved ones as she answered the call to join those that passed on before her. Dorothy is preceded in death by her loving husband, Bob; parents, George and Helen Bowe; father and mother in-law, Allen (Crow) and Viola Turner; siblings and spouses Philomena (Bernie) Bowe, Emery (Eunice) Bowe, Merita (Henry) Schmidt, Valeria (Art) Bohl, Rolland (Donetta) Bowe, Donna (Marvin) Benish, Luke (Helen) Bowe, Gilbert Sikora, Pete Loew, Archie (Marie) Turner, Janice Hetzel.
Dorothy is survived by children Randy (Jean) Turner, Rod (Kellie) Turner, Robby (Missy) Turner, Rachelle (John) Nitz. Grandchildren Emily (Adam) Bradley, Kelsey (Jesse) Zwiefelhofer, Isaac Nitz, Fayth Nitz, Kianna Turner, Ryan (Courtney Erickson) Turner, Travis (Heather) Turner; Step-grandchild Corey Lueck. Great-grandchildren Turner & Parker Bradley, Rafi and Savi Lou Zwiefelhofer, Riggs Turner, Nyleah Turner; Step-great-grandchildren Cal, Brody, Miles, Lanie, Rayland, Kooper, Cayden. Sisters Bernadette Sikora and Blanche Loew. Special nephew and niece Tom and Peggy Schmidt; Godchildren Danny Bohl, Greg Turner, Joleen Benish, and Carrie (Schmidt) Phelps; and numerous nieces and nephews.
A special thanks to the wonderful nursing support from St. Croix Hospice, and caretakers Josh, Sandy, and Peggy.
Mass of Christian Burial will be celebrated on Tuesday, February 22, 2022 at 1:00 PM at St. Paul’s Catholic Church in Bloomer. There will be a visitation from 11:00 AM - 12:30 PM at the Olson Funeral Home in Bloomer. Olson Funeral Home in Bloomer is assisting the family. Online condolences may be expressed at olsonfuneralhomebloomer.com
To order memorial trees or send flowers to the family in memory of Dorothy Ann Turner, please visit our flower store.