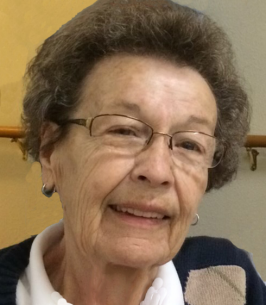 Darlene Steinmetz, age 86, passed away Friday, February 18, 2022 at Dove Healthcare in Bloomer. She was born April 15, 1935 in Chippewa Falls to George and Lydia (Pietz) Mickesh. She married Elmer “Amy” Steinmetz on October 23, 1952 at St. Paul Lutheran Church in Bloomer. Darlene and Amy owned and operated Steinmetz Food Market for many years. She developed many friendships while working as an outpatient aid at the Bloomer Hospital and activity aid at Hetzel Care Center. Family was the most important thing to Darlene. She loved attending all of her children and grandchildren’s sporting events, weddings, and family gatherings. She loved living on the lake and taking care of her flower gardens, traveling, making dumplings, watching all sports and doing crossword puzzles.

Funeral services will be held on Friday February 25, 2022 at 11:00 AM at St. Paul Lutheran Church in Bloomer. A visitation will be held from 4:00 – 7:00 PM on Thursday at the Olson Funeral Home in Bloomer and one hour prior to services at the church on Friday. Interment will be in the Bloomer Cemetery at a later date.

To order memorial trees or send flowers to the family in memory of Darlene Ann Steinmetz (Mickesh), please visit our flower store.