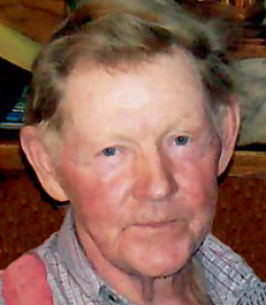 Charles Franklin Freeberg, age 87, passed away peacefully of natural causes at his home in Colfax on January 30, 2022, with his family by his side. He was born August 19, 1934 in the Town of Ludington, Eau Claire County, to Hilmer and Olga (Hilson) Freeberg. He married Betty Seehaver on March 31, 1956 at St. John’s Lutheran Church in Popple Creek. Charles was a farmer all his life and loved everything that it entailed. Watching his crops grow as the seasons changed, driving his John Deere tractors and raising his Black Angus beef cattle gave him a great deal of joy. He loved a good challenge and could fix just about anything. Charles was an accomplished carpenter, and enjoyed woodworking and building furniture. Being the youngest of six boys most likely contributed to his scrappy attitude and larger-than-life presence. He was a true caregiver, making sure his wife, Betty, as well as his family, had everything they needed. Charles had a deep and abiding faith that guided him on his life’s journey.
He is survived by his wife of 65 years, Betty, of Colfax; his children: Christie Michels of Colfax; Paul (Vicki) Freeberg of Colfax; Suzanne (Tim) Rowan of Menomonie and David (Heidi) Freeberg of New Auburn. He is also survived by grandchildren: Chism (Jaime) Michels, Logan and Samm Michels, Jennifer Freeberg, Jessica (Bill) Johnson, Dalton and Konner Rowan, Johann (Whitney) Freeberg, Bjorn, Jorgan and Terje Freeberg, Karl (Hannah) Freeberg and Zakary Pieters; several great-grandchildren; one great-great grandchild; many nephews, nieces, relatives and friends.
He was preceded in death by his parents, Hilmer and Olga Freeberg and brothers, Garfield, Marvin, Harlyn, Robert and Daniel.

To order memorial trees or send flowers to the family in memory of Charles F. Freeberg, please visit our flower store.