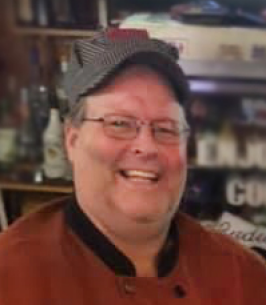 Billy J. Stolt, age 57, passed away unexpectedly on Sunday, July 24, 2022, in Brookfield, Wisconsin with his wife by his side after attending a Brewer’s game.
Billy was born on January 29, 1965, to DeWayne and Darlene (LaGesse) Stolt. Billy graduated Bloomer High School 1984, where his love of football began. Oh how he loved his “Steelers” and he would share with you how great they are.
On September 6, 1997, Billy married Jennifer, the love of his life, at Hope Lutheran Church in Eau Claire, WI. They were looking forward to celebrating their 25th wedding anniversary this year.
Billy’s legacy in the kitchen began 40+ years ago. His career began as a cook at Gateway, Fatboy’s, Ruby’s and Blue Moose. In July 2008 a lifelong dream came true for Billy when he opened “Billy’s Grill & Catering”. There was no other place he loved to be than at the restaurant, spending time with people, and saying his famous lines “Ain’t gonna lie to ya” and “God bless ya” . As you know he loved and treated everyone just like Family, his generosity, infectious laugh and big heart was always welcomed by everyone he met. His love for the Bloomer community was very important to him and was always happy to give back with no questions asked. Every time you walked into the Badgerhole Billy had smile on his face and wanted you to sit down and have Crown Royal Apple shot with him while listening to the jukebox playing Frank Sinatra, Dean Martin, David Allen Cole, just to name a few of his favorites.
Billy was blessed with an abundance of family, friends, and customers. Nothing brought him more joy than the love he had for his wife, Jennifer, and his two sons, Loren and Logan. He was so proud of the young men they were becoming as they worked side by side at the restaurant.
He is survived by his wife, Jennifer (Johnson) of Bloomer; two sons, Loren and Logan both of Bloomer; two brothers, Gary (Rita) Stolt of Bloomer and Roger (Kim) Stolt of Albert Lea MN; two sisters, Mary (Doug) Gervais of Bloomer and Carol (Randall) Schick of Chippewa Falls; mother in-law, Julie Johnson of Chippewa Falls; sisters in-law, Cheri Stolt of Bloomer and Lisa (Greg) Goyette of La Crosse; brother in-laws, Todd (Ryanne) Johnson, Troy ( Kristen) Johnson and Zachary (Andrea) Johnson of Jim Falls; and numerous nieces, nephews, cousins and friends.
He was preceded in death by his parents, DeWayne and Darlene Stolt; two brothers, Loren Stolt and Wayne “Skeeter” Stolt; two sisters, Susie Stolt and Kerry Stolt; nephew, Lucas Wayne Stolt; grandparents, Ottman and Agnes (Kirkman) Stolt and Edward and Elsie (Whitsell) LaGesse; father in-law, Dennis Johnson; and sister in-law, Emma Leigh Johnson.
A Celebration of Life will be held at 3:30pm, on Friday, July 29, 2022, at the Pines Ballroom with visitation to follow from 4-8pm. In lieu of flowers, the family requests monetary donations. Olson Funeral Home in Bloomer is assisting the family. Online condolences may be expressed at olsonfuneralhomebloomer.com.
To order memorial trees or send flowers to the family in memory of Billy J. Stolt, please visit our flower store.